About Yizong & The Moral Dragon 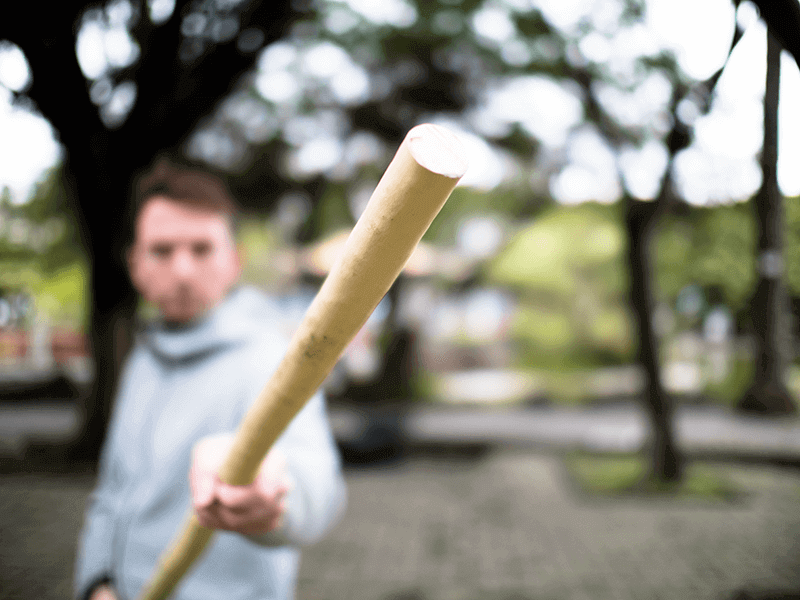 From the Monkey King - to Taiwan - master kung fu and back again.

My interest in kung fu started as a young boy sitting in front of the TV, watching the hit 70's cult classic Japanese television show called 'Monkey Magic'. I didn't know at the time but the show was based of the classic Chinese novel 'The Journey West'.

I never had anyone trying to convince me to join in with kung fu and I quite naturally moved towards martial arts. After a very brief introduction to Karate as a teenager I found western boxing and much preferred the approach to learning fighting skills. The training was fantastic and I quickly got to grips with coordination, movement and timing of boxing. It was in the boxing gym where I learnt an important lesson, the hard way. You should never feel pressured to fight someone stronger, heavier, more experienced and skilled than you, that you have to be very careful who you choose to spar with and trust. Yes, I got hurt and subsequently quit boxing altogether.

As good as boxing was I needed an alternative strategy to help make up for my inferior physical strength and lack of ability to develop it, that's when I began learning and a daily training regime of Shaolin kung fu, tens of thousands of kicks later I felt that I had learnt enough from Wushu and without a staff in my hand and a sword in my belt I looked to invest some of my time in other things, like trying not to be single, making art and preparing for university.

So, back to martial arts - I could box, move, kick and jump, my coordination was good and felt confident when sparring, I wasn't quite 23 years old and moved back home after graduating university. Whilst settling back into life in Kent I found Internal Kung Fu.

An old kung fu acquaintance of mine from my Shaolin days had started a Xingyiquan class which I began to attended regularly, initially training kung fu again sparked my interest to learn more about fighting and I followed my new teacher to various martial arts instructors throughout the UK for dedicated practise on everything to do with scrapping. We sparred regularly and I learnt the tit for tat trade-offs of fighting people that knew about boxing and it was clear to me that something else was needed from the training but obviously missing from the Xingyi fighting drills that I was being taught at the time; I needed to lear how to really use kung fu.

Spending more and more time training Hebei Xingyi I quickly saw the potential in Xingyiquan forms, such as Five Element Kung Fu and 12 Animals and how they could be incorporated into fighting application. Around that time I learnt of the famous BBC documentary on Internal Kung Fu called Way of the Warrior, for the first time I was learning about maintaining structure and using whole body power, I learnt about Qigong and breathing, Xingyiquan opened my mind to new possibilities about training kung fu and training kung fu for life and not just to become a better fighter or learn how to defend myself, kung fu would eventually became more about a life choice than anything else.

After training Xingyi Quan for many months I met my teacher's instructor Bill Tucker - a senior student of Luo Dexiu who at that time was already a very well respected martial arts fighter and teacher of Internal Kung Fu based in Taiwan, he had also featured in the BBC documentary Way of the Warrior that I mentioned earlier. That is when I looked closer at his lineage named Yizong and learn of his teachers and Gao Yisheng line of Bagua Zhang.

It turned out that I had previously met Tucker at my university the year before, I was intrigued by his Xingyi class advertisement I saw in a local chip shop in Farnham, it caught my attention because it stated that he had lived and trained with some of the most respected kung fu teachers in Taiwan; a place where I had worked for one summer just the year before that; So, I went along and met him and watched a lesson. Meeting up with Tucker again two years later and many miles away from Farnham was crazy and I was soon kicking myself for not joining up with him sooner because he was a good internal kung fu teacher with authentic traditional kung fu training methods.

After a year of Xingyi in the UK Master Luo came to teach a seminar in Kent, this happened just as I happened to find a job in Taiwan so I could start training with him there, turned out the seminar was great and Luo turned out to be the real deal - a genuine kung fu master.

At the end of that first seminar with Luo he gave me a few instructions as to how I could find his class in Taipei - "go to the park at night and walk around until you see some foreigners practising kung fu."

My Exodus to a new life in Taiwan.

Taiwan bound the airplane was landing at Honk Kong International airport and made the softest landing I've ever experienced on a flight, everyone onboard the plane cheered, in retrospect it must have been a good sign leading up to my kung fu adventure in Taiwan,  it was the summer of 2000 and the start of a new life.

I already decided that I would stay in Taiwan for at least five years and get as much kung fu as I could. I found Luo's class at Chiang Kai Shek Memorial Park in Taipei and slowly got into training with Luo. By 2003 I was training all the time, I had almost no social life and all my friends apart from one or two were already training with Luo or had come along to the class. Kung Fu had taken over my life and it wasn't all that bad. Luo's main classes were Bagua and as I already knew some Xingyi so he slowly taught me extra forms and techniques within the Bagua lessons, next I took an interest in Xingyi sword and regularly took a practice sword which he would inevitably take from me and show me new stuff, or take my sword and shove an umbrella in my hand then make me spa with him, you can imagine the outcome; some very painful lessons learnt.

Luo later started up a dedicated Xingyi class on Saturday and Sunday mornings which he did not always show up for, however it didn't matter if he didn't show as I had so much to work on. By 2005 - 6 I had learnt most of the Bagua and Xingyi systems, I had been taught Taiji principles but for some unknown reason we had only been taught the first section of the Chen Pan Ling Taiji form (Nangjing 99 form of Taijiquan), we had practised a lot of Si Ping Tui Shou for years in fact, as well as vertical and horizontal drills. Taijiquan was never attractive to me and so even today much of my time is taken up with Xingyi and Bagua and I still don't have much of a hankering for Taiji.

Around 2006 I was constantly tasked by Luo to teach new students, this was frustrating as I felt that I still had not learnt everything and could use the time working with my peers more, I even noticed people who had joined the class long after me had learnt things that I hadn't; Many years later sitting with Luo on a park bench in the UK I reminded him that I hadn't got one of the Xingyi forms, to which he smiled and said quite joverly "do you think I'll teach you everything?", I just laughed with him.

I trained Internal Kung Fu in Taiwan pretty much full-time till 2008, in those eight years I dedicated myself solely to Luo's teachings as I still do. I left Taiwan and moved to Japan and continued training and teaching in the parks of Kyoto for two years before returning to Taiwan for a brief stay on my way back to the UK. I started teaching Internal Kung Fu in the UK in 2010 and have been back to Taiwan every year since then to catch up with Luo, when I'm not attending seminars in London, Germany and France I look forward to at least three weeks a year in Taiwan developing my kung fu knowledge and skill. 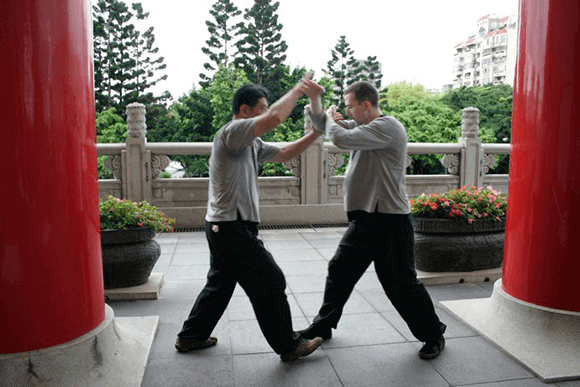 It has been a profound journey so far, a truly great experience and privilege to learn kung fu closely with my teacher Master Luo De Xiu.

If you'd like to learn Qigong, Standing Meditation, Heavenly Stems, Xingyi, Bagua, Sword or Staff please contact me for 1 on 1 tuition or small group sessions.

Come and learn Bagua, Xingyi and Taiji with Ollie in Bath, car parking available. Please click on the kung fu classes button below to learn more about the lessons.